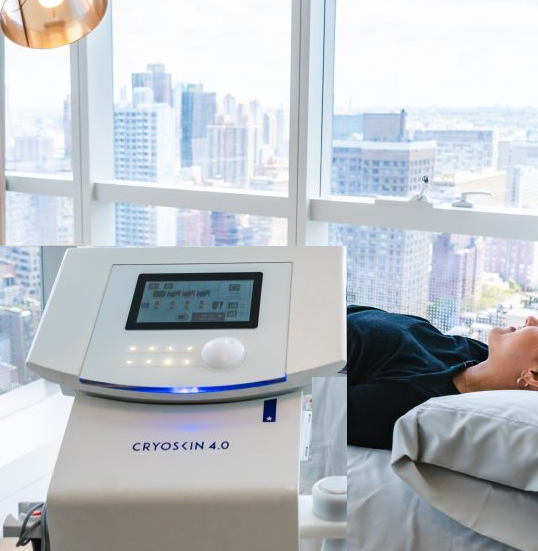 Cryoskin therapy is a new, non-invasive way to contour the body and reduce fat cells. The treatment uses extreme cold temperatures to destroy fat cells, resulting in a slimmer appearance. Cryoskin therapy is also said to improve the appearance of cellulite and help tightens skin. The procedure is quick and painless, and there is no downtime required afterwards. Proponents of cryoskin therapy claim that it is an effective alternative to more invasive procedures such as liposuction. While more research is needed to confirm these claims, cryoskin therapy is emerging as a popular option for those seeking non-surgical body contouring.

How Does Cryoskin Therapy Work

Cryoskin therapy is a non-invasive treatment that uses freezing and heating temperatures to target specific areas of the body. The treatment is said to be effective for fat reduction, cellulite reduction, and skin tightening. But how does it work?

The entire process takes about 30 minutes, and there is no downtime afterwards. Some people may experience redness or swelling in the treated area, but this should disappear within a few hours. And unlike surgery or injections, there are no side effects associated with cryoskin therapy.  So if you’re looking for a non-invasive way to improve your appearance, cryoskin therapy may be worth considering. Just be sure to consult with a qualified professional to ensure that it’s right for you.

Both cryoslimming and coolsculpting use cold temperatures to destroy fat cells, but there are some key distinctions between the two.

Coolsculpting is a FDA-approved procedure that uses controlled cooling to target and freeze fat cells. The treated area is then massaged, which helps to break down the frozen fat cells.

Cryoslimming, on the other hand, uses a process called cryolipolysis to target and destroy fat cells. The treated area is then exposed to cold temperatures, which causes the fat cells to break down and be eliminated by the body.

Body sculpting and CoolSculpting are two popular cosmetic procedures that can help to improve the appearance of the body. Both procedures involve the use of specialised equipment to target and remove fat cells from the body. However, there are a few key differences between these two treatments.

Body contouring and Coolsculpting are two popular methods for reducing fat deposits and improving the overall shape of the body. Both procedures involve freezing fat cells to break them down, but there are some key differences between the two.

Body contouring is a more invasive procedure that requires the use of a small device to deliver the cold temperature to the treatment area. This can be uncomfortable for some patients, and there is a risk of tissue damage.

Coolsculpting is a non-invasive procedure that uses a special applicator to deliver the cold temperature to the treatment area. This is typically much more comfortable for patients, and there is no risk of tissue damage.

In terms of results, body contouring can provide more dramatic results, but Coolsculpting may be a better option for those who are not looking for such drastic changes. Ultimately, the best way to decide which procedure is right for you is to consult with a qualified specialist who can evaluate your individual needs and goals.

Cryolipolysis and Coolsculpting are two popular fat-reduction treatments. But what’s the difference between the two? Let’s take a closer look.

Cryolipolysis uses extreme cold to break down fat cells. The treatment area is first numbed with a cold gel or cooling device. Then, a special applicator is used to deliver controlled freezing temperatures to the fat cells beneath the skin. The fat cells are frozen, and over time, they are naturally broken down and eliminated by the body.

Coolsculpting also uses extreme cold to break down fat cells. However, instead of numbing the treatment area first, Coolsculpting applies a suction cup to the skin. This helps to draw the targeted fat cells up into the applicator where they are exposed to freezing temperatures. The frozen fat cells are then eliminated by the body over time.

Both Cryolipolysis and Coolsculpting are effective fat-reduction treatments that can help give you a slimmer, more sculpted appearance. However, Cryolipolysis may be a better option if you have sensitive skin, as it does not require direct contact with the skin during treatment.

Both Cryo Slimming and Coolsculpting procedures use cold temperatures to target and eliminate fat cells, but they differ in how they achieve these results.

Cryo slimming involves exposing the body to subzero temperatures for a short period of time, which causes the fat cells to break down and be absorbed by the body.

Coolsculpting, on the other hand, uses a controlled cooling process to target and kill specific fat cells. Once the fat cells are frozen, they are then eliminated through the body’s natural waste removal process.

So, do you think which procedure is right for you? The best way to decide is to consult with a qualified professional who can assess your individual needs and goals.

How To Prepare For A Cryoskin Therapy Session

Cryoskin therapy is a treatment that uses extreme cold to destroy fat cells and tighten skin. The therapy involves exposing the skin to subzero temperatures for a short period of time, which causes the fat cells to break down and be absorbed by the body.

Cryoskin therapy can be used to slim the waist, thighs, and arms, and it can also be used to reduce cellulite and stretch marks. Before undergoing cryoskin therapy, it is important to consult with a medical professional to ensure that the treatment is right for you. In addition, there are a few things that you can do to prepare for your session.

What To Expect During And After Cryoskin Therapy Session

During a cryoskin session, a trained technician will apply a gel pad and special cup to the area of your body that you wish to treat. The cup will then deliver freezing temperatures to the area for about 30 minutes. You may feel a cold sensation during the treatment, but it should not be painful.

After the treatment, you may feel some temporary discomfort, redness, or swelling in the treated area. These side effects typically resolve within a few days. You may also see some visible results after just one treatment, but most people require 2-3 sessions for optimal results.

Cryoskin therapy is safe for most people, but it is not recommended for pregnant women or those who are breastfeeding. If you have any other health concerns, please consult with your doctor before beginning cryoskin therapy.

Risks And Side Effects Associated With Cryoskin Therapy

The most common side effect of cryoskin therapy is temporary numbness or tingling in the treated area. Other possible side effects include: redness, swelling, bruising, headache, and pain. Most side effects are minor and resolve quickly on their own.

However, more serious side effects such as frostbite or nerve damage can occur if the procedure is not done properly. For this reason, it is important to only have cryoskin therapy done by a trained and certified professional. Overall, cryoskin therapy is safe and effective with minimal risks and side effects.

The cost of cryoskin therapy varies depending on the clinic you visit such as in Los Angeles and the area you want to be treated, but it generally ranges from $250 to $500 per session. Given the popularity of the treatment, it’s likely that the cost will continue to rise as demand increases. However, for many people, the results are worth the price tag.

Pros And Cons Of Cryoskin Therapy

Cryotherapy is a type of therapy that uses extremely cold temperatures to treat various medical conditions. Cryoskin therapy specifically uses low temperatures to destroy fat cells and improve the appearance of skin. This type of therapy has become increasingly popular in recent years, as it is a noninvasive alternative to surgery.

There are many benefits of cryoskin therapy, including the fact that it is painless, requires no downtime, and is relatively affordable. In addition, cryoskin therapy has been shown to be effective in treating conditions such as cellulite, wrinkles, and stretch marks. As more people learn about the benefits of this treatment, it is likely that cryoskin therapy will become even more popular.

Cool Sculpting can help to tighten skin, but it is not a replacement for surgery or other more invasive methods. The procedure can be used to target specific areas of the body where fat tissue has been removed, helping to improve the overall appearance of the skin. In some cases, Cool Sculpting can also be combined with other treatments, such as Ultherapy, to help achieve even better results.

The FDA has not yet approved Cryoskin for use in the United States. However, the treatment is available in Europe and other countries. Some spa’s and clinics in the US offer Cryoskin treatments, but it is important to check with your doctor before undergoing any type of treatment.

Cryoslimming is a weight loss treatment that involves freezing fat cells. The idea behind cryoslimming is that by freezing the fat cells, they will be destroyed and eliminated from the body. This process is also known as cryolipolysis.

How Much Does Cryoslimming Cost?

On average, cryoslimming treatments can range in price from $75 to $350 per session. The number of sessions needed will depend on the amount of fat you want to remove and the area being treated.

Cryoskin therapy is a new, non-invasive treatment that uses extreme cold to destroy fat cells and promote collagen production. The therapy has been shown to be effective in reducing the appearance of cellulite, as well as reducing fat deposits and helping to tone the skin.

While there is still much to learn about how cryoskin therapy works, there is evidence to suggest that it can be an effective treatment for those looking to improve their appearance. If you are considering cryoskin therapy, be sure to speak with a qualified practitioner to see if it is right for you.[/vc_column_text][/vc_column][/vc_row]